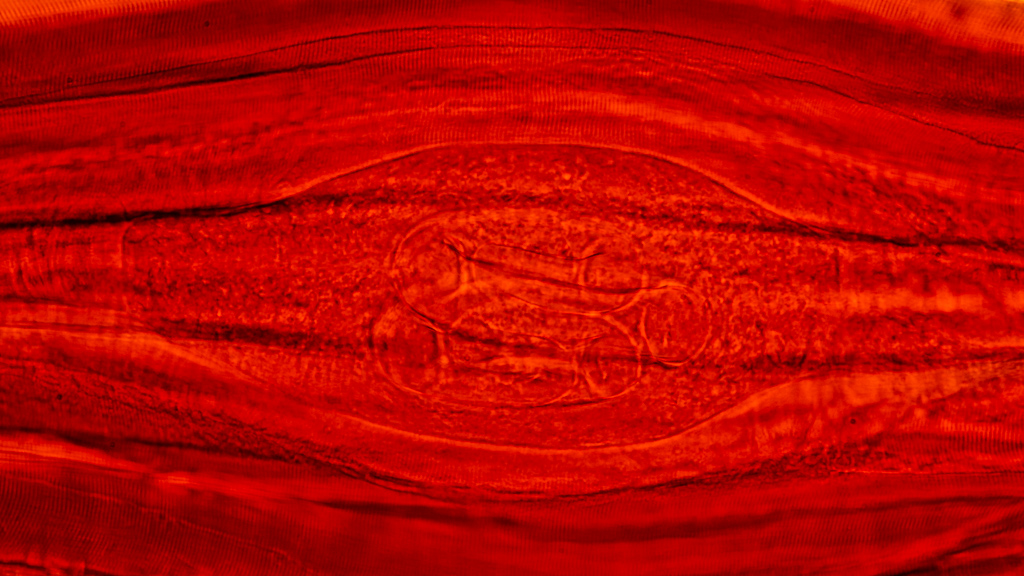 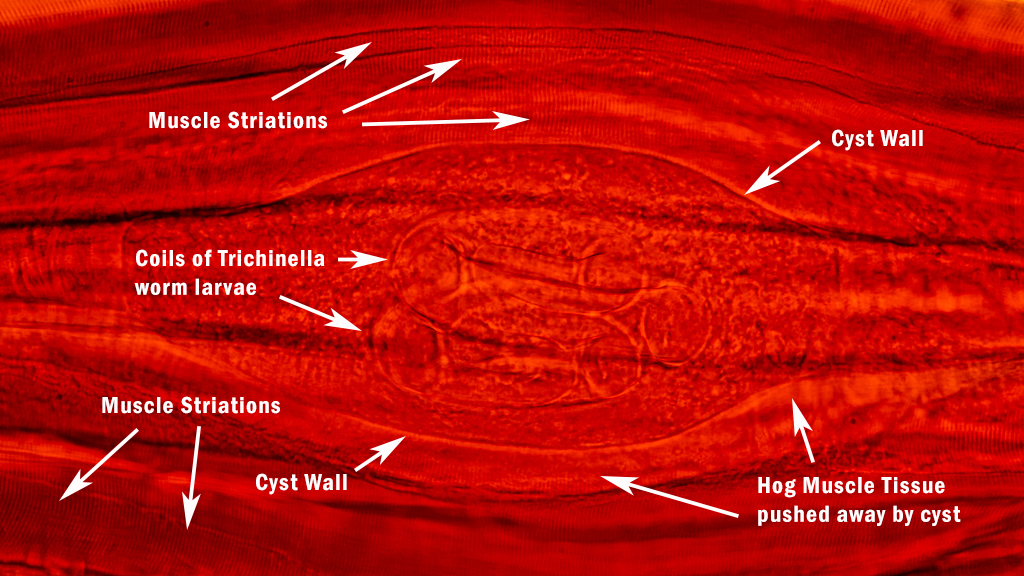 Labels
on
Labels
off

Trichinella species, the smallest nematode parasite of humans, has an unusual lifecycle, and are one of the most widespread and clinically important parasites in the world.[2]  – Wikipedia

This nasty little roundworm is why we are always told to cook our pork well-done.

Shown here as a cross-section of a larval cyst in pork muscle. This is the normal infectious stage for humans.  The species name “spiralis” was given due to the spiral nature of the encysted larval worm. After being eaten in raw or undercooked meat, the cyst will break open in your (or another animal’s) intestinal track.  The larvae then  migrate to the intestinal wall where they enter the mucosa, mature and reproduce. The adult female worm can live around six weeks and give birth to over a thousand larvae. The larvae will pass into the intestinal wall, gain access to the circulatory system, looking for a muscle cell in which to encyst. Once encysted, the worms are extremely difficult to kill, and very likely there for the life of the host, waiting for something to come along and eat the muscle tissue to restart the life cycle.

The Home page top image is also Trichinella spiralis. The slide is from around 1890, and no mention is made whether it is pork or human muscle. In the Home page image you can see the spirals of the coiled roundworm from above, and in cross-section as in the image here. The stain has completely faded, and the specimen appears tan to the unaided eye. The colors in the image are the result of it being shot with Differential Interference Contrast (DIC). This research technique requires polarization and a pair of specially constructed and very expensive prisms in the light path, but results in higher resolution and higher contrast images than regular bright field microscopy.

Per Wikipedia, the first symptoms may appear between 12 hours and two days after ingestion of infected meat. The migration of adult worms in the intestinal epithelium can cause traumatic damage to the host tissue, and the waste products they excrete can provoke an immunological reaction.[2] The resulting inflammation can cause symptoms such as nausea, vomiting, sweating, and diarrhea. Five to seven days after the appearance of these symptoms, facial edema and fever may occur. Ten days following ingestion, intense muscular pain, difficulty breathing, weakening of pulse and blood pressure, heart damage, and various nervous disorders may occur, eventually leading to death due to heart failure, respiratory complications, or kidney malfunction, all due to larval migration.[2]

In pigs, infection is usually subclinical, but large worm burdens can be fatal in some cases.[8]

In the United States, the commercial (store-bought) pork supply has a very low incidence of Trichinella. Not zero, but a generally low risk. Game animals however, can carry the Trichinella cysts and their meat should be cooked well-done to kill the parasite larvae.

Trichinella spiralis is a viviparous[1] nematode parasite, occurring in rodents, pigs, bears, hyenas and humans, and is responsible for the disease trichinosis. It is sometimes referred to as the “pork worm” due to it being typically encountered in undercooked pork products. It should not be confused with the distantly related pork tapeworm. – Wikipedia